To make women and children feel that they belong to a family and that they are loved and accepted by Society. To strive towards the development of a well balanced (emotional, moral, social and intellectual) individual who will contribute to a healthy society. 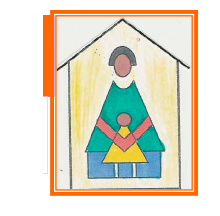 The original idea of Ms Pat Martin and the group woman from 5 churches in Paarl in 1999 was to build a shelter to help abused women and children. In 2001 AHOS was registered as a non –profit Organisation

The following criteria should be taken into account with regard to:
1. Children
2. Adults

Here follows a story of a remarkable woman that is progressing well, although there are still challenges.

This woman was born in Paarl, followed the usual orientation of living in a society with norms and values. The area where she came from was a ‘sort’ of poverty stricken area. This meant that her parents were poor, but tried their utmost best to provide in her needs. She was the eldest of her siblings as well as more disciplined to show respect for her parents.

Her father was a strict parent and her mother, a stereo typical soft spoken and submissive lady. The father was also a believer of punishment and they were not spared the rod. According to our client, she was now aware that they, she, her siblings and her mom had experienced abuse at the hands of her father. Our client always mentioned that it was terrible living in fear all the time and horrific as a child not to feel loved.

Her mother became ill and died of her illness, her father committed suicide, years after. She had to inherit their property as the eldest, just to find out later that her brother, younger than her was the owner. Soon she found out that there was corruption involved. She then met her husband and left her home. Once again, she was experiencing all kinds of abuse through her years. She left her husband after so many years, going back to her parent’s home. In that time, she was introduced to domestic violence, more traumatic for her and her children. Her flat, adjacent to the house was set alight and she was supported by Department of Social Development. She was then referred to a place of safety.

She and her children was exposed to the shelter, rules were obeyed, etc. In this time, she was through so much hurt and in the event had ‘weird’ nightmares.  For some time, she was hospitalized and under professionals such as psychologists, nurses and psychiatrists. When she was released from hospital, she was supported by Shelter Social Worker, housemothers, Shelter Manager and a few other staff. In a matter of time, she was sorted again.

This included where she was supported by Social Worker with counseling with regard to Planning of the future, Forgiveness towards those that have hurt her, to let go of the property that was illegally stolen from her, to let go of the father’s non participatory role as well as his financial obligations.  This meant that she gave up hope of the children’s father’s responsibility such as maintenance and visits.

When she left the shelter, she decided to leave the area of bad memories. She was appointed as a permanent worker at the Post Office and within a year’s time she was promoted to Supervisor, not delivering mail on a bicycle anymore. She has her own place now, and got engaged to her partner that she met in Paarl. With regard to her children, they are still well behaved and progressing well at school. She send updates on a regular basis, but one thing stands out. They are happy and they have moved on by the Grace of God.

To make children feel that they belong to a family and that they are capable of becoming good citizens who can make a contribution to society.

To provide a stable, caring and safe environment to abandoned, abused and neglected children.

To work towards the reintegration of children with their own families or caring families in the community.

To provide support to abused women and their children irrespective of race, religion or colour.